Last night was the opening for Hero Complex Gallery’s “IMAGINED WORLDS; The Imagined Worlds of del Toro, Gilliam, Kubrick, Lynch & Scott” tribute show. Being a huge fan of Lynch, Gilliam and Guillermo del Toro made it extra difficult to make a decision on what direction I would go. Ultimately, my love for Guillermo del Toro prevailed.

For this show I chose to base my illustration off the film ‘Cronos.’ I wanted to create a piece that combined some of the symbolism & narrative from the film. It only felt right for me to create a triptych type illustration. I drew Jesus Gris’ character in a pose reminiscent of Catholic Icons, as I wanted to pick up on some of the “Catholic” inspirations in the story.

Titled “A Resurrection,” this piece is an original illustration with black, gold and pearl colored inks on a 9″ x 11″ hot press board (it is framed in a 11″ x14″ frame with UV protected glass). Hope you enjoy! 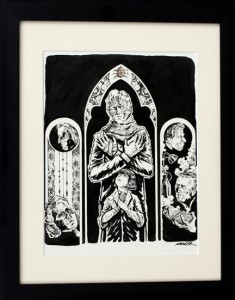